We awoke at 6:30 AM to pack a light bag and head off for the train station for a quick overnight trip to Paris.  Our international train on the Eurostar was scheduled to leave at 10:00 AM so we had to make sure we were made it to the Kings Cross station at least an hour before departure time so that we could check in and process through customs.  After a quick shower, we struck out on the 20-minute walk to the Huntingdon station and caught the 8:00 AM train into Kings Cross.  Upon arrival to Kings Cross, we took a short walk to the St Pancras International Terminal to check in.  Since we prepaid our tickets, check in was such a breeze and I had time to enjoy an espresso after getting our passports stamped. 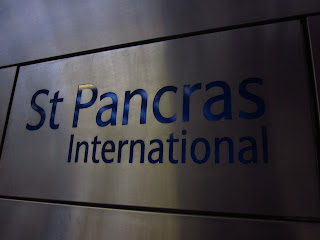 The train departed promptly at 10:00 AM (I’ve been amazed at how prompt and efficient the mass transit system is here) and rushed off to the dining car in order to beat the crowd for breakfast.  I ordered a traditional English breakfast and Shari bought a three cheese melt which we both enjoyed back at our seats.

We finished breakfast just in time to get some video of the train plunging into the Chunnel and emerged in France after the 20 minutes under the English Channel.  After about another hour, we arrived at Gare du Nord in Paris (In all, the Eurostar trip takes only 2.5 hours-it was a bit pricey, but at great way to get from England to France, especially if it’s your first time).

The fact that we were in a completely foreign country hit Shari when she saw that all of the signs and announcements in the station were in French.  I guess it doesn’t hit you that hard in England since the written and spoken language is the same as the States.
Eager to practice some of the French I studied in high school and college, we changed some pounds into Euros (do not recommend this-they give you crappy rates and charge high fees-much easier to withdraw the cash you need from an ATM), and tried to figure out the subway system (called the metro).  Since Gare du Nord is an international terminal, you will more than likely be approached by people trying to prey off of tourists-we certainly did.  Skip the “helpful” locals and go straight to the ticket booth to ask your questions.
Once we figured out the closest metro stop to our hotel, we bought our metro pass (1.60 Euros for unlimited rides and transfers-the only time you have to pay is if you leave and return to the station-it was a great deal and much cheaper than the tube in London).  On the fist leg of our journey, our train experienced a door malfunction and everyone had to get off to wait for the next train.  The train was already pretty crowded, so it was going to be interesting to see how packed it could get when the next train arrived.  Sure enough, everyone crammed on the next train and we were off to the Ecole Militaire station close to Le Tour Eiffel (Eiffel Tower).
We arrived at Ecole Militaire and surfaced from the metro to view a great little intersection full of cafes.  There was a map board at the intersection for travelers, so we walked over to get our bearings.  After getting a bit turned around, we righted ourselves and walked a short distance to our hotel D’hôtel Cadran, on a fantastic street called Rue Cler.  After checking in, dropping our bags and making a quick Skype call to my mom, we headed out to check out the neighborhood and hit a few sights.
Rue Cler was extraordinary with cafes and shops lining a great little cobble stone street.  It was about dinnertime, so we grabbed a seat at a café after snapping a few shots of the different businesses on the street.


Refreshed from our meal, we decided to walk to the Arc de Triomphe since it was a straight shot from our neighborhood to the Avenue des Champs Elysees.  Along the walk, we passed incredible building after incredible building-surely the entire city couldn’t be this gorgeous…..

…..then we turned down the Avenue des Champs Elysees….WOW!  Can’t really describe it any other way-it was spectacular with the Arc de Triomphe rising majestically in the distance.

We headed toward the Arc passing by cafes and upscale shops arriving at the incredibly busy traffic circle that encompasses the Arc.  Twelve different major streets converge at the Arc, and the traffic was, well….a free for all.  Luckily, the French government was wise enough to construct a tunnel under all of the madness for an easy walk to the Arc.
Since it was later in the day, the line for tickets to the top of the Arc was not long, so we decided to head up.  After opening our bags for security personnel, we started the 284-step accent to the top.

We were greeted with a panoramic view of Paris as we broke out to the top of the Arc.  Everything was visible and the view down the Avenue des Champs Elysees to the Louvre was breathtaking.  After taking multiple pictures and videos of our views, we headed back down to the bottom of the Arc, stopped off at a shop to buy some water, and started walking toward the Eiffel Tower.


After about a 40-minute walk, we turned down a boulevard paralleling the Seine River and walked over a bridge to the Eiffel Tower.  I was very impressed with the size and scope of the tower-it was huge and very crowded.  We took pictures and walked under the tower to see if we could take the elevator to the top.  The line was extremely long at the bottom of one of the four legs that supported the tower, but it looked like there was more than one way to get to one of the three platforms on the tower, so we walked over to a rather short line feeling rather lucky by our discovery.
It didn’t take us long to realize why our line was so short.  We were in the stairs only line!  No elevator here-just a nice jaunt up more stairs than I care to remember.  No matter, Shari and I were game, so we paid the 6.50 Euros per person fee and started our accent.
I was drenched in sweat as we stepped foot onto the first platform.  It was a bit muggy in the day, so I was definitely feeling it.  The walk was worth it though as the views were extraordinary.  We were in for a real treat too since it was getting on toward twilight, we were going to get daytime AND nighttime shots of Paris from the tower.
As day gave way to night, the tower came to life in a blanket of light.   Shari and I moved our way up the second set of stairs to the second platform.  The views from this location were even more stunning than those of the Arc de Triomphe.  All of the sudden, everyone on the tower began to OOH and AAH.  Shari and I looked up to see hundreds of smaller lights flickering on and off all over the tower.  It was beautiful to see from platform number two, but I bet it was spectacular to see from the ground-since the light show occurs on the hour, we were going to soon get our chance to see the show from ground level.
As we headed down to the bottom of the tower, we took a brief detour to a closed down market, then made our way to the grassy square in front of the tower called Le Parc du Champ de Mars to catch the light show.  At the stroke of 11:00 PM, the tower began to flicker everywhere.  Hundreds of picnickers and tourists stopped everything, pulled out cameras and began snapping away.  It was truly an incredible sight.
After the show, it was time to make our way back to the hotel.  Thankfully, the tower was close to Rue Cler, so it didn’t take long to get back to our charming little area.  Most of the businesses were winding down since it was almost midnight, but there was a crepe stand and a gelato shop open, so Shari and I got a piping hot Nutella crepe and a couple of scoops of gelato before retiring to the our hotel for the evening exhausted but excited for another day of sightseeing in this wonderful city.