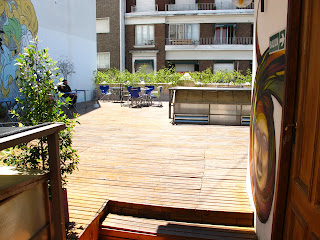 After 14 hours between airports and flights, I finally made it to Buenos Aries! The airport was much smaller than I expected, but my bags arrived and my transportation was waiting for me in the lobby so after spending a few minutes figuring out an spanish ATM, I loaded up with some Argentine pesos and headed to my hostel.
My driver was cool and only charged my 20 American bucks to make the 30 mile drive from the airport to my hostel. I arrived at the Art Factory hotel at 11 AM to find out that I would not be able to check in until 2 PM. Oh well, they have free Wi Fi and I already met some cool Canadian people and even took a picture of our roof top deck! It's getting warm since it is summer here in the southern hemisphere, so time to don the t-shirts and flip flops!
Probably going to crash a bit, then venture out with some people from the hostel-maybe catch a tango show. I'll holla back soon!
Posted by Kevin Harbison at 6:41 AM