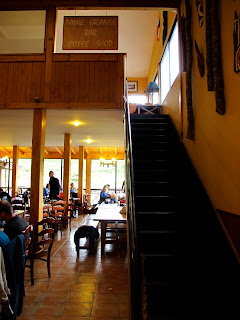 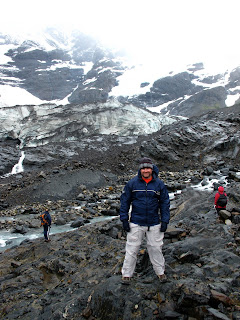 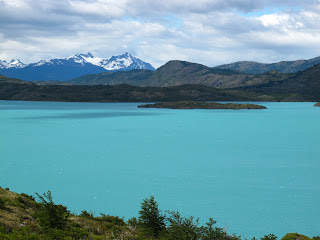 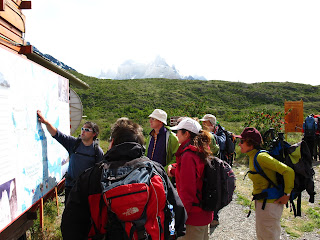 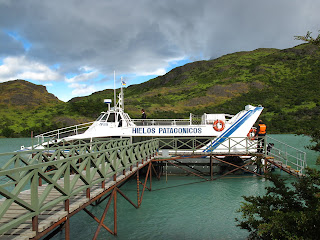 After a good night sleep and breakfast at our campsite, we broke down our gear and loaded up the bus to move to another campsite on the other side of a nearby lake. We had to take a boat across the lake, so we only packed enough gear to stay one night at the new campsite.
The boat ride was pleasant and provided some more spectacular pictures as well as some hot tea and coffee down below. We thought it was funny that all of the workers on the boats had American names like Walter and Freddy. We thought those were just their "boat names" kind of like a stage name for strippers!
Once we reached the new campsite, we stowed our gear and took a quick look around. The campsite featured a larger eating area as well as a small hotel, but there was only one bathroom for everyone and from what I heard, the water in the showers was ice cold!
Once we got settled we started our trek into the French Valley. This was a very nice hike that was suppose to be fairly flat for about 2/3, with a climb for the last 1/3. The trek ended at a beautiful lookout area that would provide 360 views of the French Valley. The problem was that about halfway into the trek, it started raining and it wouldn't stop until we boarded the boat the next day!
As we approached the part of the trek that would take us the lookout, the guide decided to change course and head to a nearby glacier because the visibility at the lookout was non-existent. The route led us along a beautiful stream and the destination was pretty nice. The wind was crazy though, so you had to be really careful when scaling the rocks.
After checking out the glacier, we strolled back to our campsite, broke for dinner, then ended the evening at the second story bar drinking wine, looking out the window at the views and watching old 80s music videos on the bar TV. The sun went down at about 11:30, so we retired for the evening ready to dry out and face the next day. Check out all of the Torres Del Paines day 2 action at: http://www.flickr.com/photos/39526836@N05/sets/.
Posted by Kevin Harbison at 9:17 PM