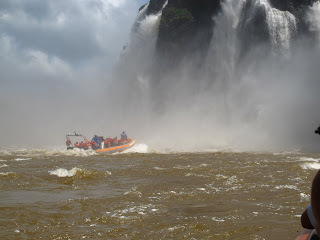 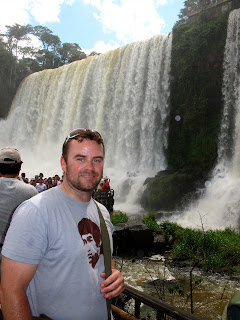 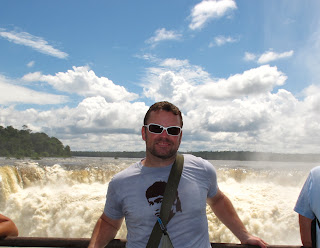 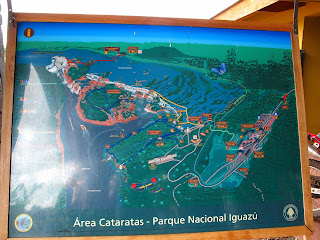 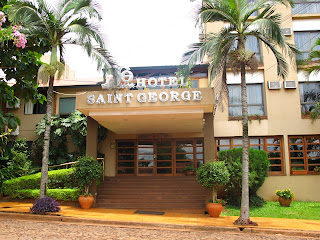 WOW! Have to start this post with that word because the falls up here are truly amazing! Rewinding a bit, I actually left Buenos Aries on Christmas day to catch my 9:30 AM flight to Iguazu. Talk about a hard time finding a cab! I was able to manage and met the craziest, coolest cab driver in the world-a true party animal. I would bet that he partied all night before driving me to the airport, but he was safe, so all was good.
Upon arrival at the airport, I was transferred to the hotel St. George in a good part of the town. The hotel is nice and they upgraded me to the junior suite-the best room I've stayed in for the entire trip!
After catching up on sleep and messages, I headed out into town to check things out. The town was a bit dead because it was Christmas day, but the restaurants were open and I contemplated eating out, but decided to go with the free dinner at the hotel.
After a few movies (Batman returns with Spanish subtitles), I drifted off and awoke at 7 AM to grab breakfast before the tour bus arrived at 8. I jumped in the bus and low and behold, met two girls from the Westside (LA for all you people who don't live in LA LA Land)-it seems that every American I've met on this trip is from SoCal. I also met a teenager from Culver City who was visiting his grandmother for a few weeks. She was a cool lady and made the teen speak Spanish so he wouldn't forget how-she was also pumped for the falls.
Once we arrived at the national park, we started our tour by visiting the Devil's Throat on the upper portion of the park's elaborate walkway system. The Devil's Throat is an impressive set of falls. Half of the falls lay in Brazil and the other half in Argentina. Along the way we saw about 7 billion butterflies-they are everywhere. We even saw a kind of butterfly that has a pattern on its wings that either says 86 or 88. I have a picture of it on my flickr account-check it out, it looks like someone painted it on!
We then took a train to the middle walk, then to the lower walk and got spectacular views of each area along the way. But it was the next event that I was waiting for-the infamous Iguazu boat ride! After viewing the lower section of the falls and getting a bit wet, we walked down to the river bank to start our "Grand Adventure" tour in a boat that takes you almost under the falls. Before boarding the boat, you could really feel the full wrath of the rain forest as the heat at that level was almost unbearable. No worries though, we would be getting very wet soon enough!
After grabbing a life jacket and a waterproof bag for all of my gear and clothes, I boarded the boat for the ride of my life! The boat crew went pretty easy on us at first staying well away from the falls and even letting us snap off a few pictures. Once they put on their water proof gear, we knew we were in trouble! The driver hit the gas while the crew member at the bow pointed his waterproof video camera at us to record our astonishment as the boat went right up to the falls. We got drenched over and over and over again-it was awesome! After playing in one of the falls for a bit, the driver took us over to another waterfall and the drenching began again!
Once he had us good and soaked and had the guests singing some kind of Argentine song, the driver hit the gas and took us down the river for a great ride carving back and forth to give us a nice thrill.
After the boat ride, we boarded an open air truck to get a short tour of the surrounding rain forest with a bilingual guide. At the end of the tour, the truck dropped us off at the shopping area and I was able to buy gifts for my nieces before getting back on the tour bus and heading back to the hotel.
It was an incredible day and from what I hear, tomorrow will be even better. Check out all of today's action at: http://www.flickr.com/photos/39526836@N05/sets/.
Posted by Kevin Harbison at 1:23 PM