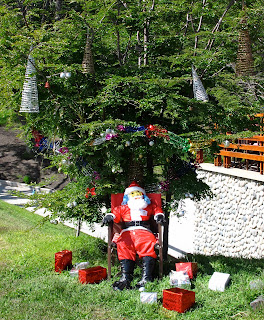 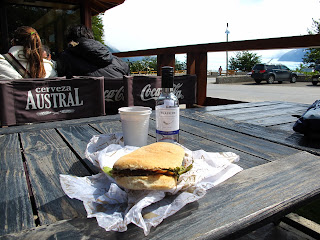 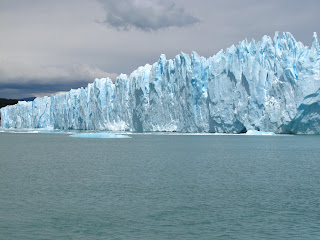 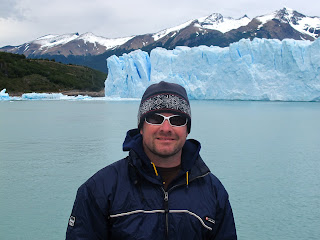 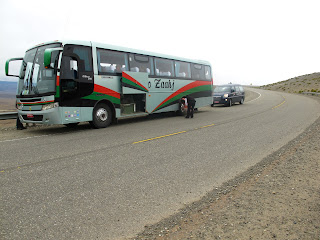 I awoke at 6 AM to get packed for the ride back to El Calafate. It was kind of sad to be leaving Chile because it meant my Patagonia part of the trip was winding down. The bus to El Calafate picked me and a few other members of my trekking group up at 7 AM and headed out for the five our journey to El Calafate. I slept most of the way to the boarder crossing-it was nice to get some sleep in a warm bus after our rainy Torres Del Paines experience!
At the boarder crossing, my friends from Mexico, Emilio and Juliana, told me that the bus was going to continue on to Perito Moreno for a two hour tour of the world's most accessible and visited glacier. This was perfect because it was one part of the trip I thought I would miss and I was bummed about it. With some translation help of my friends and the person sitting next to me, I was added to the group going to Perito Moreno once the bus dropped everyone else off at El Calafate. The bus ride went along without a hitch until we had to stop on a steep downhill section so the bus driver could fix the brakes! Not very encouraging, but he got us to El Calafate in one piece, so I will give him credit.
I was low on cash and needed to get to an ATM, but the bus was on a tight schedule so the bus driver actually fronted me the $200 pesos I needed for the trip and just told me to pay him back after we returned to El Calafate! How nice is that?
The trip up to the Perito Moreno was interesting as a tour guide gave us some background about the area in both English and Spanish. As we arrived in the national park, we rounded a bend and got our first glimpse of the Perito Moreno glacier. The size of the glacier was unbelievable! It filled the entire valley! Our tour guide gave us the option of doing a one hour boat tour and a one hour walking tour or just to spend both hours walking around. Without fail, everyone in the group had no problem paying the $50 peso price to take the boat right up to the face of the glacier.
Once we boarded the boat, we were taken within a few hundred meters of the face of the glacier. I could not stop taking pictures of the glacier-it was so massive and beautiful. My flickr account is probably full of the same pictures over and over again, but it is hard to explain just how amazing this glacier was unless you were able to see it in person.
The most impressive part for me was the sounds the glacier made as it inched it's way into the lake below. The groaning and cracking was as loud as thunder and a few pieces actually broke off into the lake while we were out on the boat (I was too slow to catch the action on camera unfortunately!)
After the boat tour, we got back into our bus and went to the start of the walking platform area located above the glacier. This was an amazing site as you were actually able to get a perspective on the glacier from above it. The sounds were very pronounced here and the views spectacular!
After walking for a bit, I retired to the snack bar at around 4 PM since I had not eaten the entire day! A nice milanesa sandwich with tomatoes and a small Malbec did the trick as I rested for a few until the bus was ready. Right before getting on the bus, I snapped a picture of Santa chillin under a tree by the snack bar. I also met a woman from Puerto Rico who was traveling for Christmas. She was in the US Army and worked in the Embassy in Santiago, Chile. We chatted about the military for a bit and walked around El Calafate before her group had to get back on the bus for the trip back to Puerto Natales.
After checking into my hostel, I downloaded some cool Argentine music the guys at the font desk were playing. Emilio and Juliana came down to go to dinner and asked me to join them, so we all headed back to Don Pichon Grill to have a spectacular dinner of grilled lamb and the malbec we had the day we met. In all, a great end to my trip to Patagonia!
It is now Christmas Eve and I will be flying back to Buenos Aries for the evening before flying out to Iguazu Falls on Christmas day for a few days of rain forest, water falls and adventures. Check out all of the pictures from Perito Moreno at: http://www.flickr.com/photos/39526836@N05/sets/.
Posted by Kevin Harbison at 5:09 AM